I think you’ll agree with me when I say it’s really difficult to know the best form of turmeric to take.

Should you take it in liquid or powder form and what supplement is the best?

And it gets even more complicated because there is such a thing as curcumin as well. What is it? Is it another form of turmeric or are they the same thing?

Let’s answer these questions first and then look at the benefits of taking turmeric.

What’s the difference between turmeric and curcumin?

Turmeric is a yellow spice of the ginger family. Most of us know it as a mild, yellow spice used in Indian cooking. Curcumin is the main bioactive substance in turmeric. It is the curcumin in turmeric that gives the spice its bright yellow color.

Curcumin is a potent chemical in turmeric, but it’s not the only one. It is one of three curcuminoids present in turmeric. According to Examine.com, curcumin and the other curcuminoids in turmeric are found in the roots (1.94mg/g) and in the rhizomes (22.21-40.36mg/g).

So, turmeric as it is, doesn’t contain huge amounts of curcumin. To really benefit from turmeric, you have to take an extract of it in a supplement.

You can buy fresh turmeric rhizomes (underground stems) in some fresh produce markets. I peel the rhizomes before I grate them to use in salad dressings, cooking and, smoothies.

Just be careful when you try it – it’s a messy procedure and the yellow pigment colors everything in sight, including your hands. Wear gloves if you can’t stand your hands being colored yellow for a while.

Many people want to know whether they should take turmeric or curcumin for their ailments. Well, that is not a simple question to answer. Turmeric and curcumin share some of the same benefits, and they also have benefits of their own.

Shared benefits of turmeric and curcumin

Research shows that turmeric and curcumin are safe and effective agents for the lowering of blood lipid levels (cholesterol) in patients with a risk of heart disease.

The scientists did a meta-analysis of 7 eligible studies that involved 649 patients in total. They found that both significantly reduced low-density lipoprotein (LDL) cholesterol and triglycerides, which help protect against heart disease.

Turmeric and curcumin have been shown to modulate inflammatory pathways in obesity which is associated with inflammation, Reduction of inflammation helps with the reduction of weight.

Another study found that participants who supplemented their diabetes medication with turmeric managed to lower their blood sugar levels amongst other indications.

Inflammation is very painful but a very necessary part of the body’s function. If we didn’t get inflammation, the body wouldn’t know that tissue is damaged or that there are harmful foreign substances present in the body.

Traditional nonsteroidal anti-inflammatory drugs (NSAIDs) used to treat inflammatory conditions like osteoarthritis are notoriously hard on the stomach, so researchers are working hard to find a drug that doesn’t have such severe side effects.

They may have found it in curcumin.

Curcumin has been found to have strong anti-inflammatory properties that equal the workings of some existing drugs being used to treat inflammation, but without the side effects.

What about the benefits of turmeric?

Research has shown that turmeric may protect against Parkinson’s disease.

A study that looked at the antifungal activity of turmeric found turmeric effective treatment for Candida infections for patients who wear dentures. The scientists were also looking for a substance that would have fewer side effects than traditional antifungal treatments.

In another study, the researchers remark that in places where people consume a lot of turmeric, there is a significantly lower incidence of cancer. The scientists investigated whether lower cancer incidence was due to turmeric by examining its effects on tumor cell growth. They found that turmeric was more potent when compared with curcumin in suppressing tumor growth,

Which one should you take, turmeric or curcumin?

I have bad news for you – there is no consensus on which one is the best to take.

Scientific studies have mostly involved turmeric extracts that have high concentrations of curcumin or curcumin on its own.

There is no official consensus on whether it’s best to take curcumin or turmeric supplements.

I have found that the best is to look for a turmeric supplement that contains high concentrations of curcumin and that has proven bioavailability of curcumin.

The role of piperine in the absorption of curcumin

Scientists have found that curcumin is poorly absorbed by the body. Studies have found that piperine, the natural alkaloid of black pepper, is able to improve the bioavailability of curcumin, so I always make sure that I buy a supplement that contains piperine as well as curcumin.

Not only that, I contact the manufacturers to make sure that their formula is clinically proven to be well absorbed.

What is the best form of turmeric to take?

You can take turmeric through capsules, soft gels, liquid, or in powder form.

Turmeric supplements are typically taken in capsule form. They are easy to take and have a long shelf life.

Turmeric with Meriva is a turmeric supplement in capsule form that comes highly recommended by several sources online.

The manufacturer made sure that the curcumin in the product can be absorbed. According to the manufacturer, Turmeric with Meriva uses a specialized extract combined with phosphatidylcholine to help generate greater curcumin bioavailability than common turmeric extracts.

The number one turmeric supplement on Amazon is Solgar Full Spectrum Curcumin. It is a soft gel product with superior bioavailability.

According to the manufacturer, 40 mg of curcumin in one soft gel delivers the equivalency of nearly 75 (100 mg) capsules of standardized curcumin extract. The manufacturer says clinical study has also shown that the supplement is long-lasting and stays in the body for 24 hours.

Soft gels are beneficial for several reasons. They are flexible so they’re easy to swallow, they tend to be easy on the stomach and they are perfect for delivering oils and fat-soluble formulations. They are a good choice for turmeric supplements as turmeric is fat soluble.

The turmeric supplement in liquid form that comes recommended by a dietician, is PuraTHRIVE Liquid Turmeric Extract. The extract is highly bioavailable and is absorbed rapidly. It is ideal for people who have trouble swallowing capsules.

PuraTHRIVE uses a proprietary Micelle Liposomal Delivery that protects the turmeric from breaking down in the digestive tract.

The best powder-form turmeric supplement, recommended by the same dietician above, is New Chapter Turmeric Force Supplement at Thrive Market 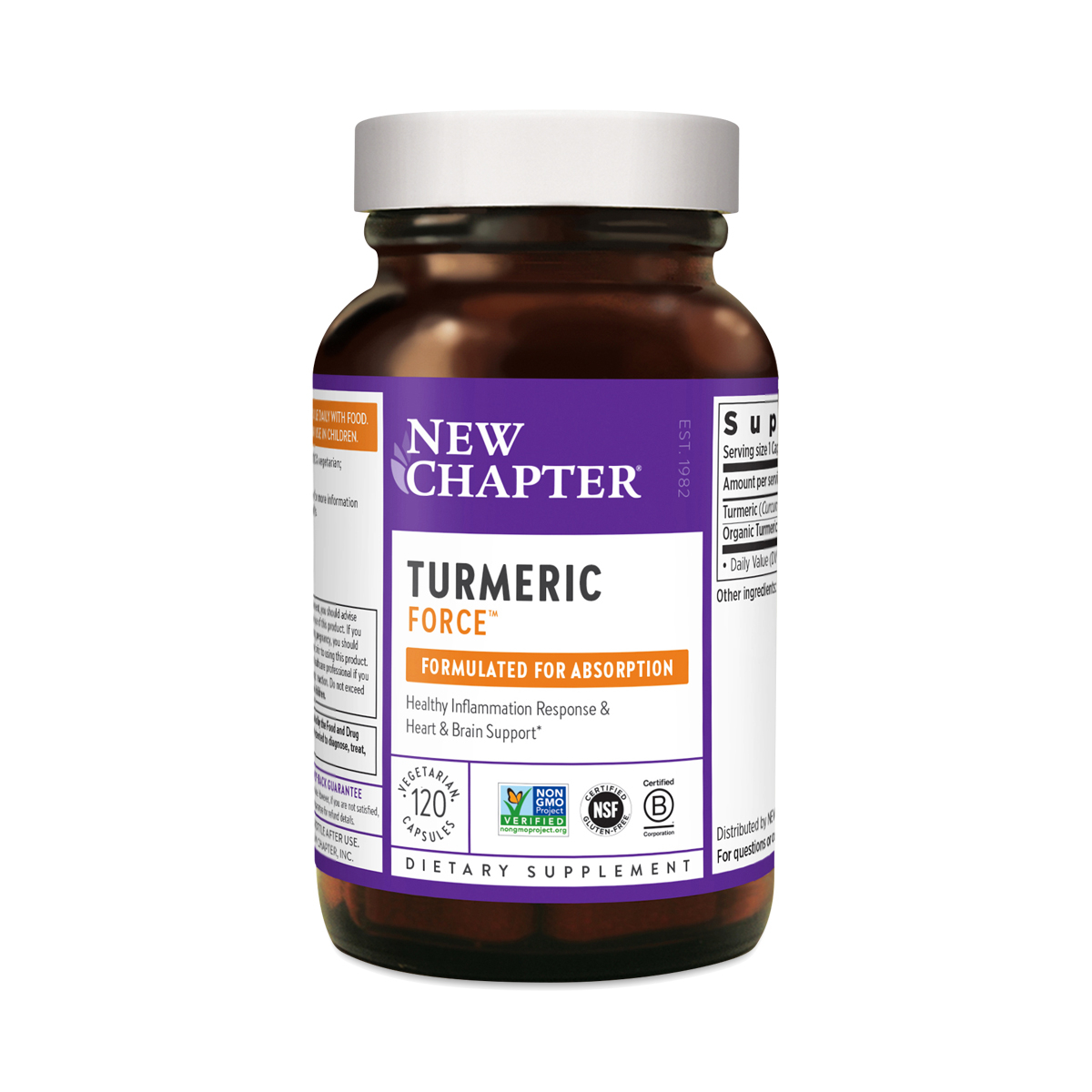 The benefit of taking turmeric in powder form is that you can easily eat it sprinkled over your food or in a beverage – think turmeric latte.

What is the best supplement to take?

This is a very difficult question to answer. There are a myriad different formulations that have been created with curcumin and curcuminoids extracted from turmeric and enhanced with different substances to improve absorbance. It’s a confusing choice to make.

The best form of turmeric to take is probably in the form of a liquid extract as studies show our bodies use 98% of liquid extracts, but scientists recommend that if you want to take a turmeric supplement it’s best to ask your doctor to advise on what product to take.

Even scientists admit they can’t recommend a specific product.

In one study a research group looked at 87 different turmeric dietary supplements and they concluded that it’s difficult for consumers to decide which product to take and that they should discuss the issue with their health provider. They didn’t recommend any specific product.

Are there drug interactions with curcumin or turmeric?

Turmeric and curcumin can interact with certain medications. People who are on blood thinners such warfarin and aspirin are advised not to take a turmeric supplement.

Turmeric supplements are also not advisable for people who take antacids is it may increase the production of stomach acids.

What are the side effects of curcumin and turmeric?

Curcumin and turmeric may strengthen the effect of some drugs as mentioned above, otherwise they don’t typically have side effects unless taken in high dosages. Taking very high amounts of turmeric can cause upset stomach, nausea, and even diarrhea.

How much turmeric is safe to take?

In scientific studies, scientists usually administer doses of 500–2,000 mg of turmeric per day. These doses usually consist of a curcumin concentration.

The World Health Organization (WHO) has determined 1.4 mg per pound (0–3 mg/kg) of body weight as the recommended allowable daily intake (ADI) for curcumin.

According to scientific research, it’s safe and effective to take turmeric supplements in doses of 500–2,000 mg per day. However, scientists do not recommend that people use high doses for an extended time.

Keep in mind that it’s always safer to sprinkle turmeric on your food since it’s not concentrated and won’t have any adverse effects.

How to Pick a Safe, High-Quality Turmeric or Curcumin Supplement

When choosing a turmeric supplement, base your choice on the following criteria:

The choice whether you should take turmeric or curcumin and how much to take is not a simple affair. Although turmeric has been used in Ayurvedic medicine for thousands of years to treat a range of ailments, it’s only recently that scientists have started looking into the health benefits of turmeric.

The supplement industry has taken note of the benefits of turmeric and has developed a huge range of supplements that can be very confusing for consumers.

The best practice is to consult with your health practitioner on turmeric supplementation.

If you still have questions about turmeric, check out this article where we discuss the best time to take it.

Marc is the creator of Mindful Searching, a content site dedicated to providing actionable, unbiased tips to reduce anxiety, stress, and improve cognitive performance. He's struggled with social anxiety for many years. Over the last 5 years, Marc has been researching and testing lifestyle changes, products, and techniques to build a happier, healthier, anxiety-free life.